I am working on a new series with the title "Skylines". The statement is as follows:

The white lines on a blue sky are fascinating to me. They appear for a short time and form beautiful lines on the sky, form patterns when there are more of them and then disappear as quickly as they were formed. The definition of these lines (contrails) is as follows:

A contrail, also known as a condensation trail, is a „cirrus-like“(High level cloud - Cirrus are thin, wispy clouds composed of ice crystals that originate from the freezing of super cooled water droplets and exist where temperatures are below -38 degrees Celsius) trail of condensed vapor (often resembling the tail of a kite) that is produced by jet aircraft flying at high altitudes. Contrails are produced at altitudes high enough for water droplets to freeze in a matter of seconds before they evaporate. Temperatures at such altitudes are typically below -38 degrees Celsius.

Contrails form through the injection of water vapor into the atmosphere by exhaust fumes from a jet engine. If there is sufficient mixing between the cold upper tropospheric air and the hot exhaust gases to produce a state of saturation, ice crystals will develop. Even tiny nuclei released in the exhaust fumes may be sufficient enough to generate ice crystals.

Contrails spread apart and evaporate with time. If the air in which the cloud develops has a low relative humidity, the cloud particles will quickly evaporate. However, even in the presence of higher relative humidities, upper level winds can spread contrails apart, forming a horizontal sheet-like cloud. For a contrail to remain in tact for a long period of time, the air must have high a relative humidity and light winds.

On the Internet you can also find theories like this:

The Chemtrail conspiracy theory claims that some trails left behind jet aircraft are different in appearance and quality from those of normal contrails, may be composed of harmful chemicals, and are being deliberately produced, and covered up by the government. These unusual trails are referred to as "chemtrails" (a portmanteau of "chemical trails").
The term "chemtrail" does not refer to common forms of aerial dumping (e.g. crop dusting, cloud seeding or aerial firefighting). It specifically refers to systematic, high-altitude dumping of unknown substances for undisclosed purposes, resulting in the appearance of these unusual contrails.

Here are some images from the series 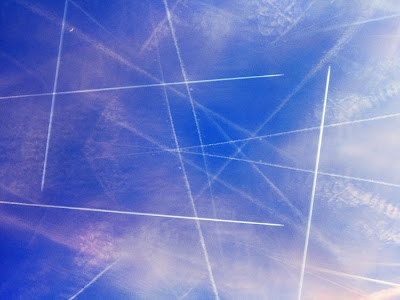 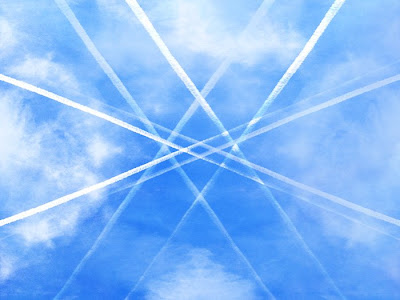 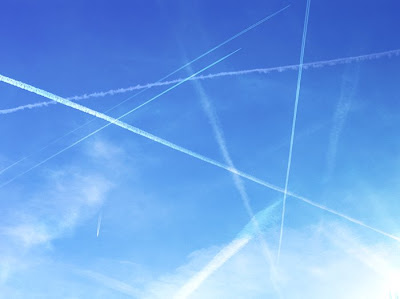