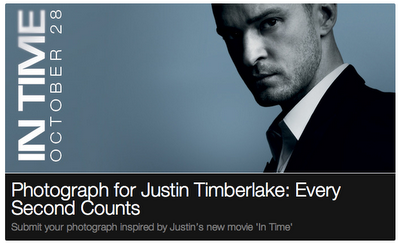 Justin Timberlake has partnered with Talenthouse to ask all photographers to think what best represents the phrase ‘Every Second Counts.’
For Justin Timberlake’s upcoming movie In Time, who stars as Will Salas, a man who lives his life minute-to-minute. In a world where time is literally spent like money, the poor must be quick or they die—so every second counts.
Justin is asking photographers to capture a moment that almost could have been. The photo can be of anything and everything—Justin is looking for the most unique perspective that best embodies this poignant theme. Make it moving, touching, and original; there are no creative limitations.
The winner will receive global exposure and have their photograph featured as the official profile picture on Justin Timberlake’s Facebook page (with 12 million likes) for the month of November 2011.
The winning photograph will also be displayed in a pop-up gallery at the Premiere of In Time in Los Angeles along with being featured across Justin's social media channels, including his website.
More information about the competition can be found on Talenthouse.
Submission Deadline is October 10, 2011
Posted by Unknown at 8:25 PM