The campaign will be kicking off a 10,000 mile road trip around America this month, stopping in major cities to set up curbside pop-up galleries featuring national and local photography.

These events are meant as a grassroots campaign to engage communities, introducing people to the artists working in their hometowns, and drawing attention to the need to support emerging artists.

The photographs on display will not be sold, but instead given away to those who connect with them, for many their first opportunity at owning original art. 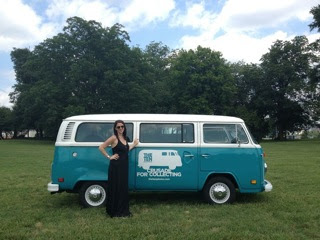 
About the Tour
The campaign will be undertaken in “Lady Blue,” a 1977 VW bus funded through Kickstarter, who
will serve as mascot, transportation and exhibition space.
At each destination city, the bus will park in a busy public space and open for “business.” Meant to attract not only fans of the project, who can follow the tour and find locations through a variety of social media outlets, but also unknowing passers by.

This guerrilla style exhibition is meant to reach the core of the nation’s public, allowing for spontaneous and genuine reactions to the available work and engaging people outside the normal art world audience.

Crusade For Collecting recognizes the skilled work of artists. The gesture of giving away art for
free is meant to incite a payitforward response and encourage future collecting by recipients.

It is not a statement on the value of the available work, but rather an act of art awareness and empowerment.


About the Participating Artists
Art available will include work from The Ten, an earlier project developed by Schwartz as a
monthly curated online exhibit of limited release, fine art photography.

This group of internationally collected and widely exhibited photographers represent a
range of work meant to capture attention and inspire artistic connection amongst the diversity of
the American public.

Additionally, To Be Announced local emerging artists of each participating city will be included in
the pop up gallery space, and often be onsite themselves, allowing The Crusade to introduce
locals to the art and artists homegrown in their own communities.

More Information, a list of the cities and even more can be found here: